You are here: Home > What's On > Beauty And The Beast

Beauty And The Beast 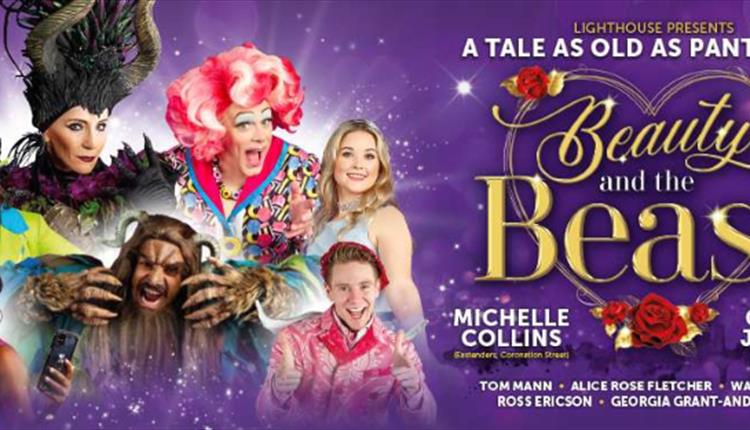 The stage is set this Christmas for the enchanting family pantomime Beauty and the Beast at Lighthouse, Poole’s Centre for the Arts. The first Lighthouse panto produced entirely in-house, it features an amazing cast headed by long-time Lighthouse friend Chris Jarvis and Michelle Collins, star of EastEnders, Coronation Street and Two Thousand Acres of Sky. “I’m so glad to be back at Lighthouse and I’ve been blown away by the good feeling around this show,” says CBeebies star Chris, who will be playing Dame for the first time on stage. “I’m really looking forward to it, but there have been so many brilliant Dames – it’s a very specific act – so there’s a lot to live up to and a lot at stake. Producing this show in-house represents a huge investment for Lighthouse and I know it will all be worth it when you see the happiness that it brings. People feel like they need something, they need a lift, because we sort of missed Christmas last year.” The sentiment is echoed closely by Chris’ co-star, Michelle Collins. “For a lot of kids, it’s the first time they’ve gone to the theatre and that means you have a responsibility – if your name’s on the poster you have to deliver,” she says. “I didn’t do panto last year because of the pandemic, but Chris and I were together in Swindon the year before and we talked about working together again so this is the first opportunity we’ve had, and I jumped at the chance.” The story has all the familiar elements, but in a nod to the original 18th century folk tale, this version includes Cupid as the playful spring-heeled purveyor of gold-tipped arrows that spread love and happiness. “It was written by Andrew Pollard for Salisbury, and we’ve turned it into a proper, traditional panto,” says Chris. “It has that traditional humour that maybe we don’t see on telly so much and it has a bit of extra story with all the fun and gags and fantastic costumes – it’s a real party!” Tim Colegate, Lighthouse Head of Programming and Lead Producer, adds: “Beauty and the Beast is particularly exciting for us as we’re bringing the producing of our panto back in house. As a predominantly receiving venue, we are used to presenting the great work of other artists, but this is the one major feature of our programme where we now have complete creative control and we’re ready to deliver Poole’s best Christmas show yet.” The cast also features Wade Lewin (Beast/Prince), whose credits include Bridgerton, the 2019 Disney film adaptation of Aladdin and the West End production of The Lion King, and Poole-born Ross Ericson (Belle’s father Marzipan), an actor-director-producer with a wealth of credits who’s looking forward to appearing in his first-ever panto. The emerging talents of Alice Rose Fletcher (Belle), Tom Mann (Cupid) and Georgia Grant-Anderson (Belle’s sister Soufflé) complete the line-up.