You are here: Things To Do > Christchurch Castle Ruins and Norman House 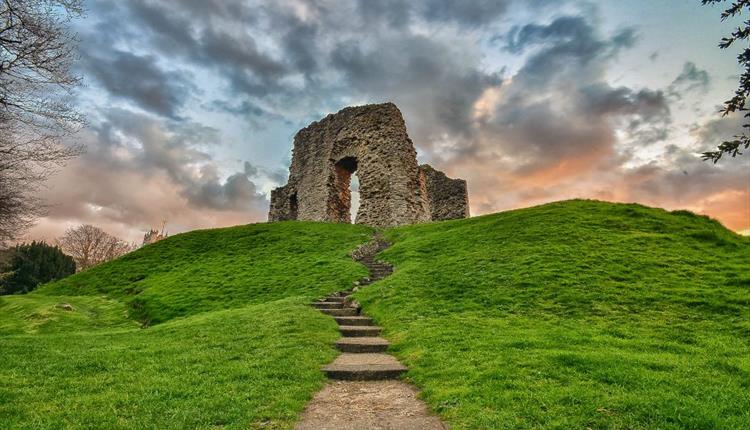 Christchurch Castle was a typical motte-and-bailey castle, dating back to the early 12th century. Its chamber block, known as the Norman House, is an unusually early survival of grand domestic architecture in England.

The area between them, now a bowling green, was once the defended courtyard or bailey of the castle, and would have been filled with buildings. Begun in 1100 under the de Redvers family, the castle passed to the Crown in 1293, and was attacked during the Civil War by Parliamentarian troops before being dismantled in 1651. The Norman House is one of the few surviving examples of Norman domestic architecture in England.

The rectangular keep stands 9 metres (30 feet) high, and seems to have had at least three storeys, with the entrance probably at first-floor level. The style of the keep, with chamfered angles in place of the flat-cornered buttresses usual in 12th-century keeps, suggests that it was built in its present form in about 1300. The motte or mound seems to have been enlarged to accommodate it.

The Norman House is a rare example of Norman domestic architecture in England. Whereas most ordinary domestic buildings of this date were built of timber, the house was built of stone, reflecting the high status of its builder. The tall, circular Norman chimney is a particularly unusual survival.

The ground floor was probably used for storage. An external staircase led to the main rooms on the first floor, where a small lobby divided the two principal rooms, the hall and solar chamber. The hall was open to the roof with widely splayed windows to let in as much light as possible. The elaborately decorated window at the north end of the hall marks the dais end, where the high table stood. The private solar chamber had an adjoining latrine emptying into the mill stream.

The east wall of the house, nearest the river, is thicker as it served as the defensive curtain wall of the castle. All the doors and windows on this exposed side had drawbars in case of attack.

Origins Of Christchurch and the Castle

Christchurch Castle lies on the site of the Saxon fortified settlement of Twyneham, or ‘the place between rivers’. A monastery had been founded in the area by Edward the Confessor (reigned 1042–66) in 1043. The presence of the monastery led to the site being renamed Christchurch in 1177.

The castle was begun by Richard de Redvers, a Norman baron who accompanied William the Conqueror to England, in about 1100. He probably built the great earthen mound or motte, the earliest feature of the castle, which would have initially been topped with a timber tower. The castle was home to the de Redvers family for the next 150 years.

Christchurch was temporarily forfeited in 1136 as Richard’s son, Baldwin, 1st Earl of Devon, supported the Empress Matilda in her unsuccessful claim to the throne against that of King Stephen (r.1135–54). It was restored to the de Redvers later that year.

Baldwin’s brother, Richard, 2nd Earl of Devon, rebuilt the castle in stone in the mid-12th century. The great chamber block, later known as the Norman House, was also built at this time, providing luxury accommodation for the earl and his family.

The castle passed to the Crown in 1293. Thereafter it was granted to several noble families, and the Norman House continued in use as the residence of the constable responsible for the security the buildings.

The site is located very close to Christchurch Priory there are multiple car parks located nearby.

Nearest Bustop: Priory Corner stops right outside or Christchurch town centre has more frequent buses and is a short stroll